Shashank Dholakia (2020-) I am currently advising Shashank Dholakia on modeling transits of planets across oblate stars. Shashank is adapting my starry code to work for these non-spherical stars and has figured out how to compute transit light curves analytically. This problem is typically solved numerically, making these calculations slow (and prone to inaccuracies). An analytic solution would allow for extremely fast posterior inference (as opposed to least-squares optimization, which is often done in the literature). Shashank is also interested in gravity darkening, and is working on a formalism to incorporate that into starry as well. 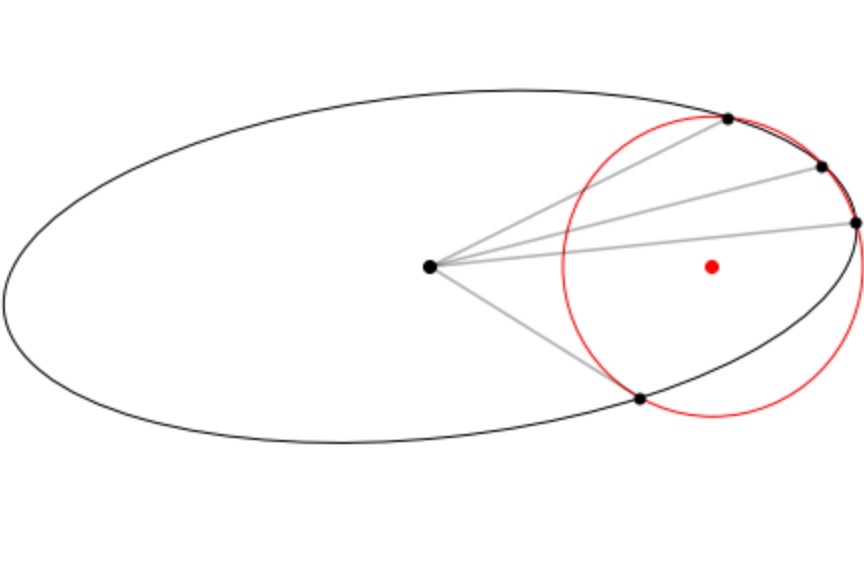 Rebecca Young (2020-) I advised Rebecca Young as part of the Simons-National Society of Black Physicists (S-NSBP). Rebecca was a undergrad studying physics, so she was new to astronomy research. Her project was to investigate the best way to infer differential rotation rates from stellar light curves. This is a notoriously difficult problem (see here). She spent the summer working on reproducing the results of Davenport et al. (2015), who inferred the differential rotation rate of GJ 1243 from its light curve by modeling its surface with two discrete spots rotating at different rates. The next step in Rebecca's project is to relax the assumption of discrete spots, and to treat the surface as a statistical process (see here), which is less prone to the degeneracies of the traditional mapping problem.


Fran Bartolic (2020-) I advised Fran Bartolic as part of the CCA pre-doctoral program. Fran is a graduate student at the University of St. Andrews working on microlensing and statistical methods for astronomy. Our project, however, was somewhat outside both Fran's and my wheelhouse: mapping volcanoes on the surface of Io, the moon of Jupiter. There is a lot of high-quality archival data on occultations of Io by Jupiter and the other Galileian moons (Europa, Callisto, and Ganymede), which Fran used to infer the locations and brightnesses of the main volcanic regions on the moon. The significance of this project lies in the fact that (1) we know the ground truth to some extent from fly-bys of Io, so it's a great benchmark for exoplanet secondary eclipse mapping in the near future; and (2) we don't know the ground truth all that well, since Io's surface is constantly evolving. Fran is working on a joint analysis of all observations of Io to infer the time evolution of the surface in a principled, Bayesian way, which could lead to new insights into the physics of the moon's interior and its tidal interaction with Jupiter. 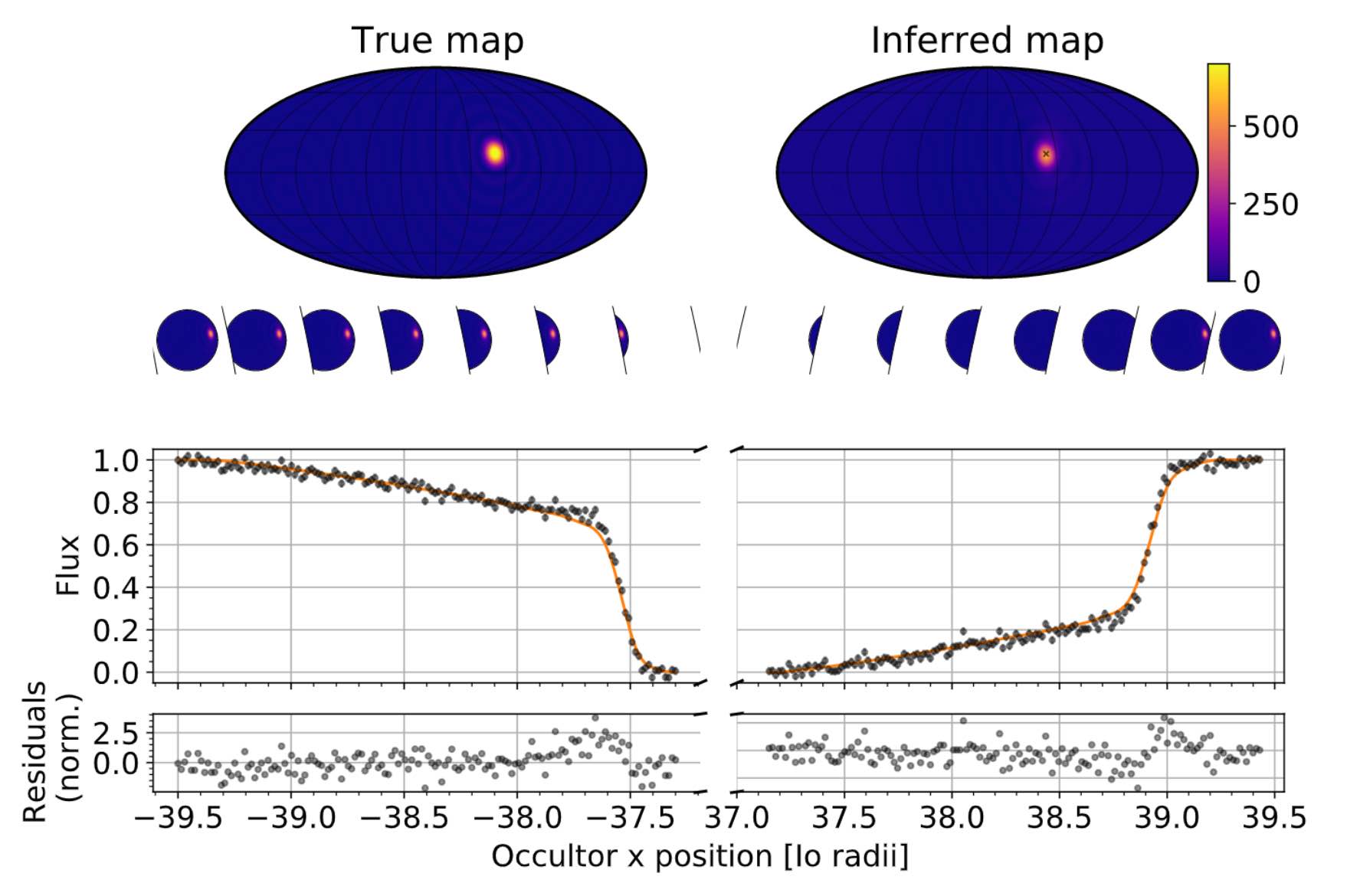 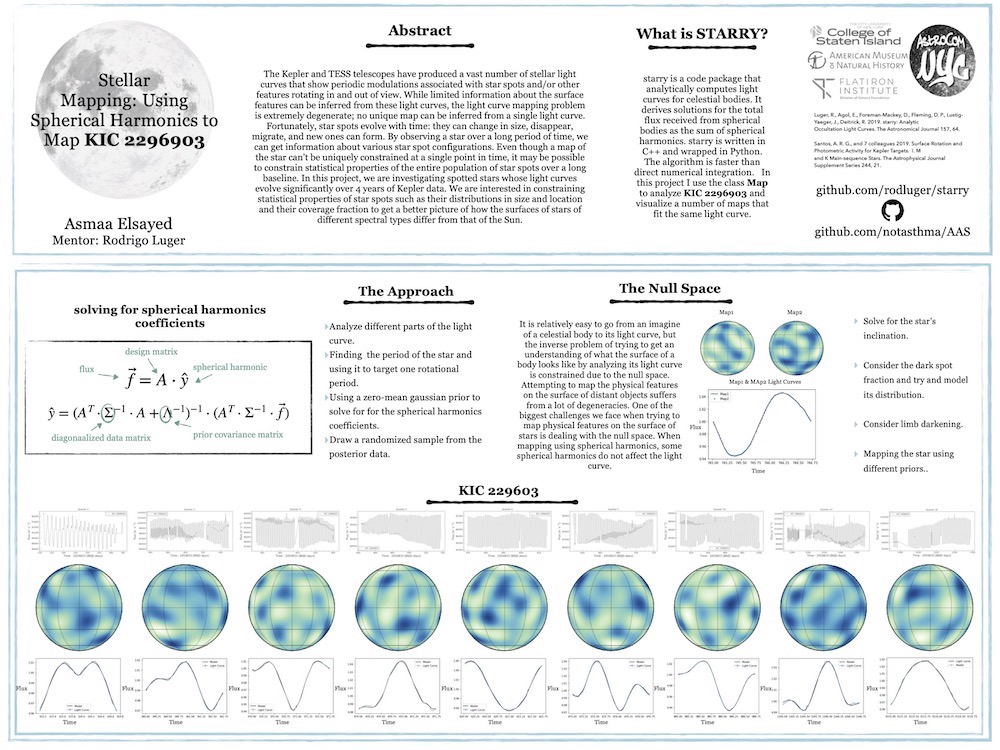 Asmaa El-Sayed (2019-2020) I advised Asmaa El-Sayed as part of the CUNY AstroCOM summer program. Asmaa was an undergrad at CUNY looking for research experience in astronomy. Under my supervision, she worked on modeling stellar light curves observed by Kepler using the starry software. Asmaa investigated the idea of the null space, the set of modes on the surface of a star that cannot be inferred from a light curve. While it is impossible to reconstruct a unique map of a star from its light curve, certain statistics of the stellar surface, such as the size and latitude of star spots, are more robust to the degeneracies in the mapping problem. Asmaa presented her work at the 2020 Winter AAS in Hawaii.


Nicholas Saunders (2016-2018) I advised Nicholas Saunders when I was a graduate student (and later postdoc) at the University of Washington. Nick helped we with various aspects of the everest code for de-trending K2 light curves. His main project was to develop the scope software to forward-model the Kepler detector in order to better understand systematics and noise sources in photometric surveys. Nick went on to work at the Kepler GO Office, where he was one of the co-developers of lightkurve, and is now in graduate school at the University of Hawaii.